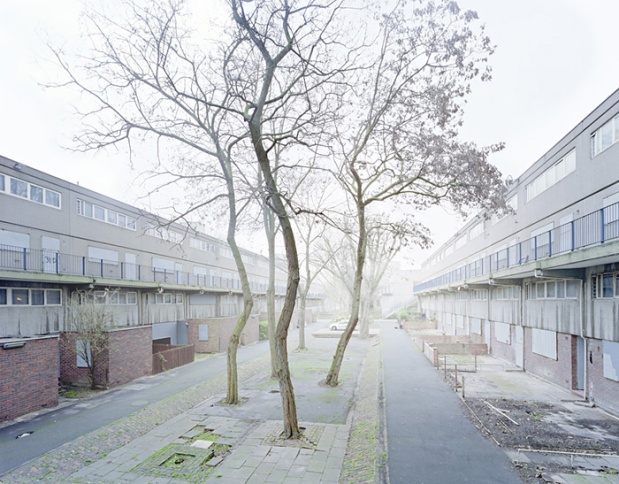 Where and when was this photograph taken?

At the Heygate Estate (Elephant and Castle, London, England), in November 2011.

Had you been there before?

I visited this site on numerous occasions, also I used to live nearby and have been aware of it for many years.

How did this opportunity come up?

I went there specifically a number of times to make this series of images.

What were the condition on site?

Cold, winter, grey morning. The estate was eerily quiet as most of the inhabitants had moved out. It smelled like London.

Are there any technical aspects about the photograph that you want to point out?

This image was the result of a protracted process of investigation and composition, beginning with a digital camera, and ending with the use of a large format camera. The negative was scanned and subjected to a number of digital augmentations.

Why did you select this image?

This image is probably my favorite from the series. I like the fact that the composition is close to symmetrical, but the trees appear to be thriving, even dancing through the space. The image contains a car, suggesting some degree of inhabitation lingers on.

Is there any particular story that happened during the shooting?

While making this series I often ran into film crews who tried to make me move or leave the site. Since they had no authority to do this, I refused to.

What did you want to communicate through this image?

This image is part of a series examining this estate, which while Utopian in intent was notorious through its later lifetime for social problems. These photographs were taken when the estate was empty and awaiting demolition and I am curious to see what remains – can the formal architecture reassert itself now that the inhabitants are gone, does the estate make more sense as an empty artifact than it does full? The estates reversing relationship with nature also fascinates me.

This is an excerpt of an interview which is part of the editorial project “1 Photo(grapher)” and originally published for Scopio Network.