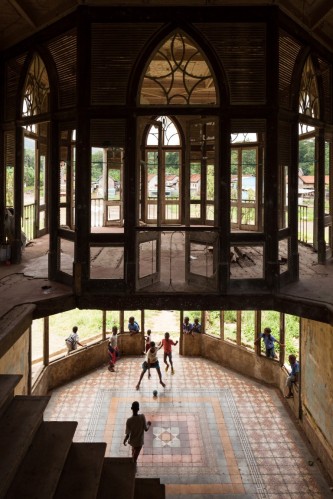 Where and when was this photograph shot?

What were the conditions on site?

The weather was really hot and humid which makes the body be permanently sweating. The smell and sound of the “roça” (country house) is very peculiar. You can hear roosters, goats, kids playing, balls. Because of its configurations and because they are open glades, the very own acoustics of “roças” are special. The smell is also very characteristic, mainly because in the majority of “roças” people and animals cohabit the same spaces. In those places where cocoa is dried there is also a very particular odor.

Are there any technical aspects about the shooting that you want to point out?

I used a full-frame digital camera and tilt and shift lens.

How did you opportunity happen?

This photograph is part of a work I did for the book “As Roças de São Tomé e Príncipe” (Tinta da China, 2013) in co-authorship with architects Duarte Pape e Rodrigo Rebelo de Andrade. We visited and catalogued 122 “roças” which Duarte and Rodrigo had already identified through a research they were developing at the time. The way we got inside the “roças” was always the same: get in and try and establish a dialogue with the local communities, trying to explain the project and asking for permission to photograph the place. The people of São Tomé are very open and friendly, which meant that in the majority of times there was no problem establishing that connection that allowed us to do our work.

Was this the first time you were there?

It was my first time in São Tomé and Príncipe, but both Duarte and Rodrigo had already been at Boa Entrada “roça” 4 years before and they could see the glass and woodwork of this bow window completely intact.

Why did you select this image?

From all the ones from the “Roças de São Tomé e Príncipe” project I chose this one because I felt that this one encapsulates some of the things that make this reality unique and which should be valued urgently. On one hand it shows the richness of this heritage, on the other hand its very advanced state of degradation. Also because it shows the very social character which is so present and so inseparable from this heritage.

What do you find most interesting about it?

I like this project and particularly this image because of the pleasure it gave to me to do it. It made me realize what type of work do I like the most to do. Somewhere between architecture, travel and reportage.

Is there anything you were trying to communicate through this image?

This entrance area as well as the bow window were added to the original house. It was built in order to receive Prince Luís Filipe at the “roça” while he was visiting São Tomé and Príncipe in 1907.

This is an excerpt of an interview which is part of the editorial project   “1 Photo(grapher)” and originally published for Scopio Network.