I received a call as I was going back to the hostel where the guys were waiting for me. “Where are you buddy? The match starts in 15 minutes!” I could barely hear Trung, such was the concert hovering above my head. Hurried, I left Plaza Trinidad, distancing myself from the laughter that accompanied tapas and cañas, that evening.

I went up to the hotel room to take a shower and change clothes. I was ready to go back to the streets, this time together with the boys and a cold Mahou in my hands. We had no idea that in the restaurant we would be delighted with an hat-trick by Falcao against Chelsea and by some pinchos de jamón con huevos de coderniz (ham with quail eggs with bread).

Some hours before we were resting in our room. Outside, a whole lot more of city life was there waiting to be known and I was just there caged. It was disturbing. Can one be asocial towards a city? I immediately reminded myself that in some situation “to be” and “to know” are synonymous.

I told Funá that I would go downstairs to take a picture and I would be right back. I promised Inês that I would take a picture of the street where she lived if I ever visited the city where she studied. Maybe it was somewhat Proustian this appetite of mine (1). The Calle Paz was not far from where we stayed, so it wouldn’t take that long.

I realized that we had been on that street before while we were looking for a grocery store. Now, the same street was not the same place anymore. I imagined how the atmosphere of the street was at daybreak was while my friend was leaving home, which twilight sounds where heard when she was returning from school.

Picture taken. I retained myself for a few seconds wondering if this modest adventure would end just there. A sudden impulse made me move down the street, distancing myself in each step from what I knew. I had no maps or guides, only my portuñol and my sense of direction.

The emergence of a building’s curved façada and the colorful showcase of an ice cream shop made me scoop from my pockets the only things I brought with me: a camera and some coins. I had the need to believe that I was behaving just like any Grenadian who had lived there for years: going for a walk with no fear of losing himself, not surprised by that which he saw every day. Secretly I was amused by the far-fetched idea of another tourist asking me for directions.

Shortly after, I came across with one of those ghost-buildings still dressed-up with one of those absolutely dated wallscapes which promise more construction in a country with already 3.4 million empty houses. Little by little and increasingly synchronous rumor began to distinguish itself in the distance.

I found the main street disappearing in the middle of the crowd. To be embraced by voices that spoke a language other than mine – but whose words of protest I understood – was comforting. Those were messages against unemployment and precarity, asking for change. “Empathy is the nature of the intoxication to which the flâneur abandons himself in the crowd”(2) Walter Benjamin wrote.

A few feet ahead and another element was familiar to me. I had seen that profile several times in magazines. In real life she was different. She seemed to be shorter. Maybe she was. That kind of moment where, for the first time, we face something or someone we weren’t expecting, fascinated me. What was sure was that no one noticed her. Why not? (3) 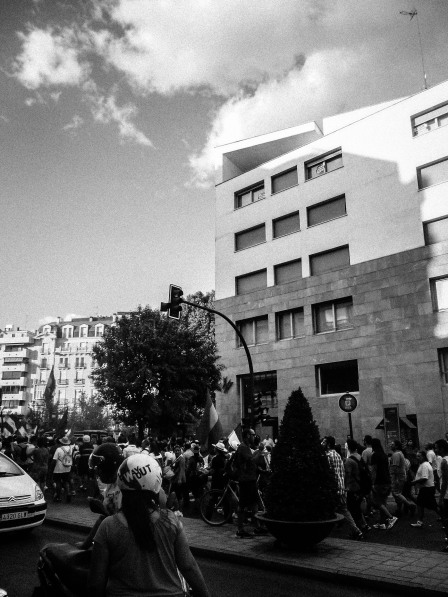 To me she was Siza’s Zaida. For the others it was just another anonymous building. In any case, it confirmed Plato’s maxim: beauty lies in the eyes of the beholder. Momentarily, I mentally withdrew myself from that crowd and everything it meant. Perhaps capriciously, I kept my gaze on that object. 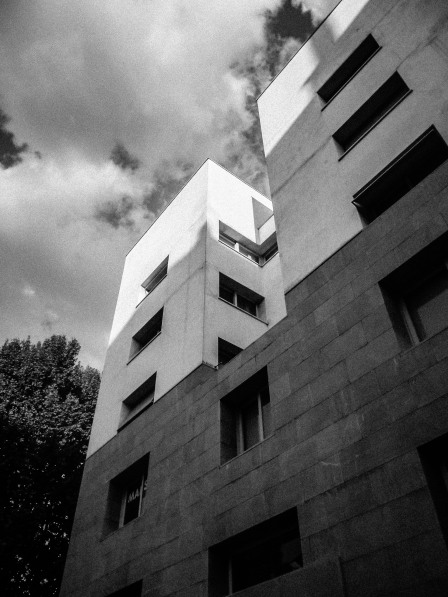 Later, I blamed myself for such a obsession: there I was, a Portuguese citizen, precariously employed, yet vacationing in Spain, enchanted by the aesthetics of a particular building, turning my back to choreography of protest unfolded around me.

If there’s anything that the latest protests has evidenced is that importance that public space has as a backstage for change. Perhaps it was the Storming of the Bastille the most paradigmatic example of the opposite, i.e., of the importance of a building’s prestige in a particular revolt. Bigger or smaller victories are achieved by citizens in squares like Tahir, Sintagma ou Taksim, not inside those buildings where – some say – people are fictitiously represented.

It is indispensable that public spaces are not withheld by a regime set by the people themselves. Reality should not be divided by those who are governors and governed, by those who speak in the Parliament and those who scream in the streets, by those who are inside and those who are outside. Just like in architecture, interior and exterior should rely upon each other. I long for moment where admiring the aesthetics or symbolism of a building is not considered vagary. Be it Siza’s Zaida or the People’s Parliament. 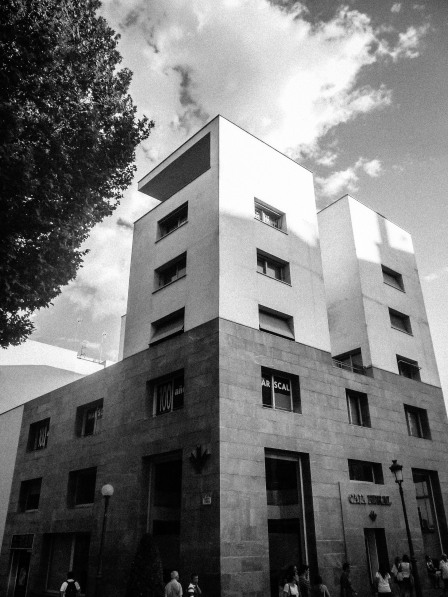 (3)  “I think most people miss that about you, and I watch them, wondering how they can watch you bring their food, and clear their tables and never get that they just met the greatest woman alive. And the fact that I get it makes me feel good, about me.” (Jack Nicholson’s character in “As Good as It Gets” (1997), director: James L. Brookes.)