On that day Oporto welcomed us with rain. We arrived early to the street where the offices of the two Portuguese Pritzker Prize winners are located. While we stood under the garage entrance, we saw him arrive in a taxi, with a few packs of Camel cigarettes balanced on top of a folder that he was carrying against his chest.

“You know, a few days ago it wasn’t raining. It didn’t even look like Oporto.” he said while opening the gate. We went up the elevator and entered a quiet office, with nobody, only illuminated by the filtered sunlight of that gray day. “Would you like a coffee?” Siza asked while turning on the lights.

In the conversation we had – interrupted by some phone calls where he spoke in three different languages – his humanistic character was shown, a quality that is also manifested in his architecture, confirming what philosopher Alain de Botton had told me some months later: “Humanity is present in buildings. Part of being a really great architect is being a kind person. This is very rare.” Álvaro Siza Vieira is like this. I imagine that anyone who has met him realizes this quickly. 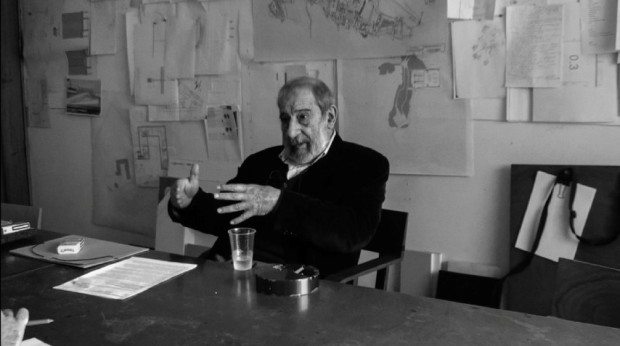 After the interview, we talked about trivial things like the fact of him being a Benfica supporter (although Oporto is his home), about his broken arm recovery or about the best cheap restaurants to eat around. But also about how hard it is to see buildings caught in halted construction, or to have work that hasn’t been paid, or the sadness behind having to let go 16 of 25 employees, or the compassion he has for this young generation of unemployed architects.

“We had little work, but to have an office didn’t cost you much”, he reminisced, “the material you needed was a desk a T-square, a triangle and paper. Then you had always an uncle or a family friend who needed a little house. It was underpaid, but the costs were none.”

Today things are different. We witness a large export of exceptionally talented Portuguese architects. A younger Siza, albeit all his quality, would not stay in Portugal in the present context. That is for sure. Nonetheless, the respect that so many people have for his work would not be the same if not for his kindness and humanism.

In critical times, it is a difficult enterprise to give hope to a generation of young unemployed people. Especially if you do so through the belief that qualities like persistence and courtesy will save us. Yet, it is important to believe that this uncertain present will shape in a positive way our better future.

Someone once said: “nobody in life gets exactly what they thought they were going to get. But if you work really hard and you’re kind, amazing things will happen.” Well, one of the great Masters in Architecture might not be having what he wished for right now. However, the legacy he has built – and that always surprises us – cannot be disassociated from his own character. For this reason, Álvaro Siza Vieira is an inspiration to all of us.

Later, while returning to Lisbon, I recalled Peter Zumthor’s words on first impressions: “We see someone and we have a first impression. What I learned was: don’t trust it – give the guy a chance. Years passed and I got a bit older. And I have to admit that I’m back to believing in first impressions. It’s a bit like that with architecture, too.”

A year has passed since that talk with Siza, and I couldn’t agree more with Zumthor.

“Dear Hugo Oliveira, Thank you for your thoughtful e-mail and for the – kind – words in it. I wish you and the new generation a recovery in time to show what you are worth. Friendly regards. Álvaro Siza